Even tropical storms can wreak havoc

The two most destructive weather events in recent history on Long Island weren’t even hurricanes. Sandy (2012) and Isaias (2020) were downgraded to tropical storms by the time they swept over our area, having lost the appellation because their top sustained winds had dropped below 74 mph.

But as residents found out in both cases, a tropical storm can do much damage. Isaias, in early August of last year, left more than 400,000 PSEG-Long Island residents without power, some for more than a week.

The American Red Cross on Long Island hosted its annual hurricane preparedness press conference at the beginning of the hurricane season at its Mineola headquarters.

Interim CEO Joe Spaccarelli stated, “As we enter what is expected to be another active hurricane season we want to remind our neighbors that now is the time create or update a family preparedness plan. Long Islanders know all too well it only takes one storm to seriously disrupt our lives.”

“Last year, extreme weather events created the largest number of billion-dollar disasters to strike the U.S. in one year,” Spaccarelli observed. “Dozens of Red Cross volunteers from here on Long Island deployed far from home to provide relief across the country. The skills and experiences that they gained responding to these major disasters will be invaluable in the event that there will be a storm here on Long Island.”

He added, “Hurricane readiness is personal to me. I first joined the Red Cross as a volunteer after witnessing the devastation of Superstorm Sandy. Since joining the Red Cross I’ve deployed to multiple hurricanes and other disasters in Texas, California, Louisiana, North Carolina and here locally as well. I’ve actually quit my corporate job after 27 years to take this role with the Red Cross—that’s how important the Red Cross has been to me.”

Spaccarelli noted that disaster training has been updated and supplies have been replenished in preparation for any upcoming disasters. He called on Long Islanders to volunteer with his organization to distribute food and water and relief items, and manage and staff emergency shelters to provide help and emotional support and more.

Nassau County Executive Laura Curran thanked the Red Cross “for not only jumping into action when it’s needed, but being preventive and proactive as much as possible.” After acknowledging her Office of Emergency Management Commissioner Steven Morelli, the executive praised the coordination and cooperation across the various agencies and public utilities represented at the press conference.

“We’re in this together,” she said. “We have these relationships already with all these other entities so that when an emergency happens we can jump into action. We do know that it’s going to be an above-average hurricane season. It’s hard to make these predictions and we don’t know what Mother Nature is going to wallop at us.”

Curran urged residents to be as prepared as possible and think of things such as what documents to take in case of evacuation or what to do with their pets.

She also warned those who bought home generators to exercise caution, relating reports of people dying from carbon monoxide poisoning or fires caused by generators not set up properly or placed in unvented areas.

Governor Andrew Cuomo’s aim, according to O’Leary, is for the state and counties to partner to “build back better and prepare for the next disaster. Combined, we have spent almost $14 billion to create a more resilient electrical infrastructure, to rebuild roads and other infrastructure, as well as to create stronger and better resiliency tools to make sure that we’re ready for the next storm. It’s also very important for New Yorkers to be ready themselves. And as you heard already, that includes making a plan, know what you’re going to do when disaster strikes.”

He gave an example of the kind of detail that make a difference: people stock up on non-perishable foods to ride out the storm at home, he pointed out, but then lack a humble manual can opener in case the power goes out.

”These are the things that the planning process will help you get ready with,” O’Leary said. “After you prepare a kit and have a plan, be aware what’s going on. Sign up for your local alerts. New York has an alert plan. You can find it at alert.ny.gov.”

O’Leary admitted that there could a case of volunteer fatigue after the struggle of the pandemic, but urged people to get involved.

“[We’re now in] hurricane season, so you never know when you’ll be called upon. The sooner you step up and help out the American Red Cross and other partners, the better we’ll all be,” he concluded.

Among the other speakers were two representatives from Long Island’s main utilities.

National Grid Downstate NY Gas Field Operations Vice President Aaron Choo thanked the Red Cross “for the tremendous partnership we’ve had over the years and we continue to build on that.”

He also included the governments as well as the police and fire departments in the list of partners.

“We do conduct simulated drills over the (course of) the year to include different emergencies,” Choo said. “We filed our New York State emergency plan for the year and we have submitted that to our Public Service Commission. Following Sandy, we installed the first storm-hardening valves in the country and that will prevent gas from coming into the home in the event of a flood. There’s a sensor valve that will send a relay back to our gas control to monitor that and in doing so keeping the customer safe as well as the infrastructure, and reducing the time for restoration.”

PSEG Long Island Transmission & Distribution Vice President John O’Connell, who is also an American Red Cross board member, said his company “has been working aggressively to upgrade our systems and processes and we are ready for this year’s storm. Just as the Red Cross is on the front line of preparedness, PSEG Log Island and its employees are on the front line, helping our neighbors and customers before, during and after the storm.”

He added, “To minimize outages, we have worked hard over the course of seven years to strengthen our infrastructure with new programs and increase maintenance programs. We’ve storm-hardened more than 450 miles of the power grid on the mainline facilities all the way from the Rockaways to Shelter Island. Additionally, we trimmed wires and trees to keep clearances and avoid tree damage during storms. We’ve literally trimmed thousands of miles of trees away from our power lines.”

O’Connell concluded, “We have plans to deal with the challenges that the hurricane season may throw at us and we urge everyone as you heard earlier today to be ready and to prepare.”

The Red Cross encourages residents to visit www.redcross.org for information on volunteering and preparing an emergency plan and an emergency supply kit.

The following information was provided by the Town of Hempstead in a flier it distributed to its residents:

Be Prepared For Hurricanes

• Develop a family preparedness plan before an actual storm threatens your area. Make sure members of your household know the plan. Select a place outside the disaster area to evacuate to such as a friend’s home in another town, a motel or a shelter. Keep a list of their phone numbers and a road map handy.

• Check with your veterinarian or local humane society for information on where to shelter your pets in the event that you need to evacuate your home during a storm.

• Clear your yard of loose objects such as bicycles, outdoor furniture, hanging plants and trash cans. Anchor objects that cannot be moved. Clear debris from drains and gutters.

• Board your windows and doors. Taping windows will not prevent them from breaking, but may reduce the risk of flying glass. Open indoor trap to attic and close all windows. .

• Be sure that your automobile is ready should you need to evacuate. Fill your car’s gas tank. Check oil and water.

• If you have a pool, do not drain it completely. Lower water levels one foot to accommodate heavy rains. Add extra chlorine to prevent contamination. Cover the pump system.

• If you store a boat in your yard, lash it to your trailer securely. Let the air out of the trailer tires and secure the trailer to something sturdy in the ground. If you store your boat in a marina, check your contract; some require that you move it when a hurricane watch is issued. You are responsible for your boat.

If You Have To Evacuate:

Stay alert for emergency weather alerts for your area. If you live in an area that has been ordered to evacuate by local officials, do so immediately. Do not wait. Turn off electricity, gas and water in your home. Unplug major appliances.

Tropical Storm Watch: A tropical cyclone with winds of 39 to 73 mph is possible in the specified area of the watch, within 48 hours. Winds may be accompanied by storm surge, coastal or river flooding.

Tropical Storm Warning: A tropical cyclone with sustained winds of 39 to 73 mph is expected in the specified area of the warning, in 36 hours or less. Winds may be accompanied by storm surge, coastal or river flooding.

Hurricane Watch: Hurricane conditions with winds of 74 mph or higher are possible in the specified area of the watch, within 48 hours. Winds may be accompanied by storm surge, coastal or river flooding.

Hurricane Warning: Hurricane conditions with winds of 74 mph or higher are expected in the specified area of the warning, within 36 hours. Winds may be accompanied by storm surge, coastal or river flooding. The warning can remain in effect when dangerously high water or a combination of dangerously high water and waves continue even though winds may be less than hurricane force.

Home Survival Kit: What You Need

In the event that you may not have access to basic items for a few days after a disaster strikes, it is recommended that you have a supply of food water, and other important items assembled for your household.

• Water: one gallon per person per day (2-week supply)

• Two-week supply of non-perishable food and manual can opener

• Cell phone with chargers and a backup battery .

• Map of the area 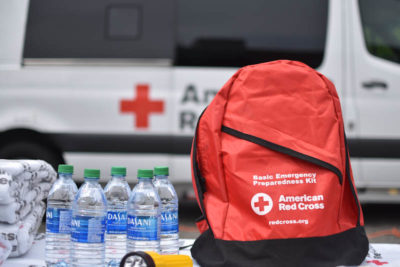 Town of Oyster Bay Emergency Operations Center: 516- 677-5757
Activated 24-36 hours before the potential arrival of gale force winds for residents who need further information such as evacuation warnings, emergency shelter locations and to get assistance in evacuating.

The Town of North Hempstead Division of Emergency Management may be contacted as follows: 311 from within the town or 516-869-6311 if outside of town.
Email: emergencymanagement@northhempsteadny.gov

The Division of Emergency Management operates round the clock during weather and non-weather emergencies and catastrophes.